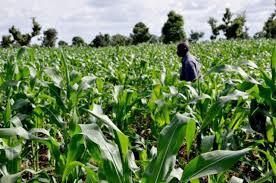 There is no doubt that Nigeria is one of the countries blessed with a sizable portion of arable land and a favourable weather condition which is suitable for around the year farming. Despite having these natural advantages which are capable of making us a major exporter of raw and finished farm produce, on the contrary, we spend heavily year in, year out on the importation of agricultural produce (raw and finished products).
From the aforementioned, we can see that the agricultural industry (which is the highest employer of labour in Nigeria) is unable to meet up with the growing demand for all forms of agricultural produce in Nigeria. As a result, the country is forced to engage in unfavourable economic practices like the importation of food items and other agricultural products which could have been cultivated on our farmlands.

According to NationMaster, Nigeria has the 9th largest arable land. With approximately half the size of Nigeria’s arable farmland, France has been earning an average of 40 billion dollars from agricultural products in recent years. How have we been unable to earn a billion dollars from Agricultural export let alone fully maximize the opportunity benefits of being in a country with a large arable land? The most logical answer to this thought-provoking question lies in our farming method.

Up to this decade, lots of small and medium-scale farmers are still heavily involved in the utilization of farm labourers for planting and harvesting on their farmland. With the continuous use of hoes, cutlass and other simple tools for commercial farming, not only will we be unable to profit from this multi-billion dollar industry, but we might also get to a point where it will become difficult to have a three square meal simply because the food items in circulation are continuously in low supply.

How do we avert this intending danger of food insecurity and benefit from the plethora of financial gains and the multifactorial tendencies inherent in the agricultural industry? The only answer to this question is by intensifying the use of mechanized farm equipment on our farmlands.
According to TOHFAN, we have approximately 7,000 tractors in Nigeria. Based on the size of our farmland, Nigeria should have nothing less than 70,000 fully-functional tractors. This right here coupled with the inductive reasoning that renting a tractor to the farm is more expensive, is one of the reasons why Nigeria is under-producing in the agricultural industry.

Considering the fact that the agricultural industry directly affects so many industries, the benefits of intensifying mechanized farming will not be felt by the farmers and tractor owners alone. As a matter of fact, the nation has more to benefit from improved farming methods than the farmers. Below are a few of the economic benefits associated with the intense usage of mechanically powered tools on our farmland:

1. Increase in foreign exchange reserve: By fully-mechanizing our farm methods, we will be exposed to enough food and cash crops which are hitherto imported into the country. Hence, there will be no need to spend a considerable amount of foreign exchange on the importation of similar product.

2. Strengthen the Nation’s Diversification goal: Ever since we experienced the oil boom in the ’70s, a large chunk of the nation’s revenue has been from the sales of crude oil. Aside from the dangers of having a linear source of revenue, in recent years, the proceeds of crude oil have proven to be insufficient in the short and long run. To avert the intending disaster associated with over-reliance on a single commodity and improve our annual revenue in multiple folds, mechanized agriculture needs to be taken more seriously.

3. Reduce the unemployment rate in the country: since mechanization significantly reduces the cost of producing most raw materials used in the production of other finished goods, there will be a natural inflow of investors which will, in turn, create multiple employment opportunities for the teeming population.

That the intensification of mechanized farming in any nation is capable of significantly improving the economy of such a nation is not a hypothesis yet to be proven. The U.S.A, France, Netherlands and African countries like Kenya and South Africa have only a small portion of their population in the agricultural industry. Yet, they make significantly larger revenues from it.